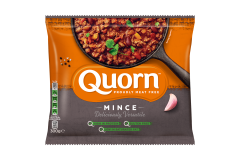 Made with Quorn Mince

A delicious, fragrant and nourishing Thai green curry recipe made with Quorn Pieces.

If you like it hot, you will love this aromatic chunky vegetable and Quorn Mince curry. It's absolutely packed with...

Enjoy a smoky twist on traditional tacos with this chipotle infused recipe. The chipotle paste, garlic and onion mix...

Pile it high for a decadent Summer feast! Double stacked burgers with smoked chedder slices, fresh jalapeno and a...

Get creative and add Quorn Pieces to your chow mein for a delicious noodle dish. Enjoy your favourite meat free...

No reviews for this recipe yet.